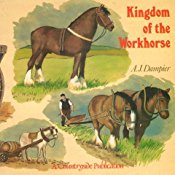 This splendid account of the lives of working horses in and around the city of Manchester at its 19th century zenith, when it was the “workshop of the world”, home to the greatest manufactories in Britain, is one of my favorite books.

A.J. (Tony) Dampier was from north west England and knew his subject both from his own research and from contact with the horsemen of the region from the middle of the 20th century until his sad death in 2011. It’s therefore largely, though not exclusively, based on local history and oral traditions. Arguably it’s the type of history of which we need more, because all too often the stories of working people and animals are not recorded and then they simply disappear. Frequently the only histories we have are those created after the theme has been viewed through a middle-class lens and dissected for academic purposes.  This, however, is working class history recorded by a local man with an in-depth knowledge of and passion for horses, and who had extensive, practical equine and equestrian experience himself.

There are limitations to the book, however. Dampier’s broader brush strokes relating to early history are unconvincing: “No doubt these ‘dark Phaenicians’ horses were of Arabian origin” (11); “Then came the terrible, cruel Vikings, their contribution to our story is minimal, being a force of destruction rather than construction” (5). In fact, the Norse contribution to the north and its equine history is becoming better known and it’s increasingly looking like a substantial one, not just linguistically but also in terms of horse breeding and exchange. Dampier himself points out that the Norse derived “Rossendale” in Lancashire is the “Valley of Horses”.

Away from the general though, Dampier is compelling. He understands the connectedness of early modern infrastructure, commerce, settlement, place names and language in the region in a way that’s both instinctive because it’s an embedded part of his own heritage, and academic, because he acquired local research library-based facts about the working horses of Manchester and the surrounding dales.

This is revealed not just in the text but also in an excellent choice of outstanding images, such as the unidentified horse-drawn mass funeral in Manchester, ca. 1900, on page 25. We can only speculate on whether this reflects a local mining or industrial disaster, a family tragedy or an outbreak of disease. One local “Black Master” (director of horse-drawn funerals), John Greenwood, appears to have specialized in ensuring the working class had respectable funerals, for his advert in the Manchester Guardian in 1860 read: “John Greenwood begs respectfully to intimate that, in order to meet the requirements of the working classes, he has always for hire neat one horse hearses and coaches, terms (inc. coachman) 7/6d. each” (77).

That’s another of the great strengths of the book – the attention to detail, a boon for those of us who like the facts of what things cost, how they were obtained and how ordinary folk lived. There’s plenty of detail about individual characters, such as Ailse O’ Fussers, the owner of Jerry, probably  “the last commercial pack horse in Great Britain.” (Actually a donkey, p. 7) Ailse (also known as Alice Hartley) was a commercial carrier, and her team of “gals” (Galloway ponies, though the term was probably being loosely applied to type and function rather than a “breed” here) carried lime across the moors to Rochdale until her death in 1879. “In build she was short and stout, and she wore over her petticoats a male’s topcoat. A ‘Jim-crow’ hat was fastened securely on her head by a handkerchief over the top of her hat and tied under her chin. She carried a long stick in the style of a shepherd, and presented more the appearance of a man than a woman. Yet she had a lover, named Thomas Walton, a young farmer…” (William Roberts, quoted on p. 15)

Pack horse trains continued to be used across the Pennines, from Durham and Westmorland in the north, to Derbyshire in the south, until the late 19th century and even, in some cases, possibly into the 20th. However, millennia of pack horse use were mostly brought to an abrupt end by the arrival of steam and it was now in the great cities and on ploughland that working horses were to find a place.

In and around the streets of Manchester, Dampier introduces us to characters both equine and human; Dick Dalby, head horseman of the Prestwich Co-op stables, for instance, who taught all his horses to go on the ‘Pee Patch’ before they came into their stables after work – they had to pee before tea; Joe Bumper, the coal carrier from Rochdale who brought two poor horses to the local smith/farrier/vet and asked him to make one good one out of them only to be disappointed to discover that the “one good one” that the compassionate farrier “made” for him had a wall-eye, which Bumper “conna abide” (35).

We learn about the secretly brutal methods of “horse whisperers” and the visit of the more enlightened (in Dampier’s view) Solomon Rarey to Manchester. We discover why a monopoly on the horse-drawn omnibuses in Manchester, created by the amalgamation of several companies in the late 19th century, was bad for passengers but good for horses. We hear of the clever horse who taught himself to use the metal curbs on the edges of pavements as a brake, and the well-trained horse who stopped when a police officer held up his hand, even though his driver was asleep!

Dampier explains why the trandem was used so widely in Manchester that it came to be known as a “Manchester Team” and why all newspaper delivery horses in Manchester were referred to as “Chron. Horses.” Plus, why well-meaning ideas often have unintended consequences. The horse troughs brought in by named donors at locations throughout the city were often key points for the spread of equine epidemics and “many transport companies forbade their drivers to stop at the troughs for fear of infecting their horses” (50).

Some working horses were more fortunate than others, and the horses of the monopoly Manchester Carriage Company Ltd. in 1865 were “stabled in conditions approaching those that accommodated the pampered private horses. Large, well-ventilated stable blocks were constructed where the animals’ every comfort was considered. The usual dirt floors that had been expected to absorb any moisture and urine were replaced by blue brick floors with good drainage, high ceilings and plentiful windows all contributing to the sweet atmosphere” (49).

They were the lucky ones. Where hard-nosed commercial demands prevailed, it could be a different story, driving the undercurrent of violence, superstition and chicanery that was never very far from horse trading. “Mugs” were set up by “horse for sale” adverts for in the Manchester Chronicle and Evening News, “using terms such as ‘Property of a gentleman going abroad’ or ‘Lady in reduced circumstances’. All horses were ‘regretfully for sale’ and ‘To good home only.’” (Both these last phrases are still in daily use on Facebook, with the usual addition of “through no fault of his or her own.”) The mugs, inevitably, ended out of pocket and the advertiser nowhere to be seen.

Whether it’s describing travelling in the “rumble-tumble” (a large basket on the back of coaches that was supposed to hold luggage, but frequently carried unfortunate passengers desperate to travel), or describing the underhand methods used by coach companies to get round the “no galloping” rule, Dampier is always lively and readable. Like Anthony Dent, he entertains and carries the reader along, and as with Dent the reader is left wondering “Where did he get that?”, frustrated sometimes by the lack of references for follow-up purposes. It wasn’t written as an academic text but to record local stories and memories. Nonetheless, I believe that this is an essential source book for anyone with an interest in the working horses of 19th century industrial Britain.

It was clearly a labour of love for Tony Dampier, who also gave a home to Major, the last working horse on the streets of Manchester, for his final years. For this reason more than any other, Tony Dampier is a personal hero of mine and, to coin a phrase from Anthony Dent I think this is an outstanding book, “but I am prejudiced, so let it pass.” Dampier was a hero I never met; for though he wrote some articles for a magazine that I edited in the 1990s we didn’t have the opportunity to meet and talk, something that is of lasting regret to me. So, contact the knowledgeable while they’re alive; make the most of their experiences before it’s too late. And enjoy one of the most interesting books ever written about working horses.

Let’s kick of Workhorse May with a look at Northwest Carriage Museum.

The Northwest Carriage Museum in Raymond, Washington is North Pacific County’s most visited tourist attraction. Voted one of Washington’s best museums, the Carriage Museum houses one of the finest collections of 19th century horse drawn vehicles in the entire country.  Every year, thousands upon thousands of people make the Northwest Carriage Museum a “must see” destination stop while visiting the Pacific Northwest.  Visitors have been pleasantly surprised to find such a world class collection of horse drawn vehicles in the tiny town of Raymond.

The Northwest Carriage Museum opened in 2002 as a result of a very generous donation of 21 carriages from a local family.  Over the years, the collection has grown to 51 vehicles including a variety of carriages, buggies, wagons, sleighs and commercial vehicles.  The museum’s collection includes an 1888 Stagecoach, a 1900 hand carved hearse from Vienna, Austria, a Chuck Wagon,  a beautiful cut under Wicker Phaeton, a 1880 Mail Wagon and the magnificent Brewster Summer Coupe Brougham.    Several vehicles in the collection have an “old” movie connection.  Come see our C-spring Victoria used in Shirley Temple’s “Little Princess” or our beautiful Landaulette used in the original “Ghost and Mrs. Muir” starring Rex Harrison and Gene Tierney.  Of course, everyone loves viewing our famous Shelburne Landau which was Belle Watling’s carriage in the classic “Gone with the Wind.”

In addition to our many vehicles, the museum houses many other period artifacts from the 19th century.  Clothing, travel trunks, harness gear, hand tools, carts and an amethyst glass collection are beautifully displayed throughout the museum. Looking for something fun for the kids?  The museum includes a user friendly one room schoolhouse where children can write on the chalkboards and ring the school bell.  They can also dress in period clothing and have their pictures taken on our Three Spring Democrat Wagon.  Parents will also enjoy visiting our wheelwright/blacksmith display where they can view how wooden spoked wheels were made.

The Northwest Carriage Museum is located at the junction of Hwy. 101 and State Route 6 in Raymond, Washington. Right outside our doors is the beautiful Willapa River and a well maintained park which is the perfect place for you and your family to enjoy a picnic.  Within walking distance are restaurants, and shopping opportunities. Bring your walking shoes or bikes and hike/ride the Willapa Trails pathway to South Bend.  Bring your kayak and put in at the city dock right next to our building.

The Northwest Carriage Museum is open year round from 10am to 4pm.  They have a unique gift shop featuring a variety of jewelry, books, toys and local products. Group tours are our specialty and can be arranged in advance.  They have admission discounts for families, seniors and military personnel. AAA members can show their card and save as well.