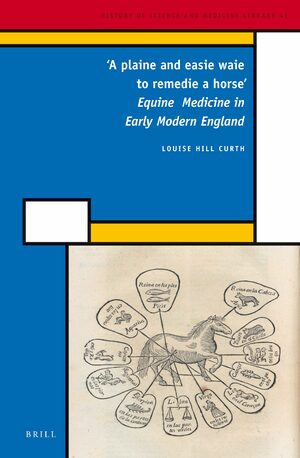 Louise Hill Curth’s ‘A plaine and easie waie to remedie a horse’: Equine Medicine in Early Modern England is the first modern study in English of early modern equine medicine. It follows from Curth’s earlier scholarship examining early modern veterinary medicine in general.1 She applies current methodologies in the history of medicine to her subject; in particular, instead of dismissing past medical ideas and practices as barbaric and ignorant, she seeks to understand them on their own terms. Though the ideas and practices in this book might be unfamiliar to those outside the fields of the history of science and medicine, the clarity of writing makes the material accessible and interesting to non-specialists.

The book begins with an overview of ancient and medieval equine medicine before turning to the structure of equine medical practice in early modern England. Medical historians sometimes apply the term “medical marketplace” to describe the multiplicity of healing options available to people in this period. Curth extended the concept to animal healing in a 2002 article in which she coined the term “veterinary marketplace,” which she continues to use here.2 She accordingly explores the different people charged with equine upkeep and healing, including members of the London Company of Farriers, horse-leeches, and servants. The book’s main chronological scope ends with the institutionalization of veterinary education in England with the founding of the Royal Veterinary College in 1791.

Her exploration of early modern medicine on its own terms is evident in the book’s middle chapters on medical beliefs and practices. Like other recent scholars, she attends to the connections between astrology and medicine in this period and the logic thereof. Due to the importance of the “non-naturals” for preventing ailments in early modern medical theory, she explains how these factors applied to advice about horses. These included issues like air (by extension, the general environment), diet, and exercise. The book also provides an overview of the diagnosis and treatment of ailments, including pharmaceutical remedies and surgery. It concludes with two chapters on the dissemination of equine medical information through oral, manuscript, and printed means.

Curth writes that her purpose is to “open up a new area of academic interest and study” in the “virtually unexplored area” of the history of early modern veterinary medicine (p. 6). Indeed, the book contains many fascinating details about past equine medical care, such as advice about stable construction, the commercialization of equine medications, and the connections between bloodletting and astrology. It accordingly prompts many questions for further research, facilitated by Curth’s clarity regarding her source base. For instance, the seventh chapter “Oral and Manuscript Culture” includes summaries of household manuscript collections containing horse remedies digitized by the Wellcome Library. She offers some comparisons between these household books and printed remedies; additional research using such manuscript evidence will hopefully provide more clues about the most common equine ailments, the cures used in practice, and their relationship to treatments in printed sources.

In addition, the book invites further investigation about the similarities and differences between human and equine ailments and treatments in this period, especially since Curth relates her work to the “One Medicine” movement (more recently coined “One Health”). This initiative seeks to promote collaboration between researchers across medical and ecological disciplines, in part to better understand the relationship between human and animal health and the environment. Historians like Curth have shown that past medical cultures (like that of early modern England) did not exhibit as sharp a divide between human and animal medicine as exists today, and operated with a more holistic concept of medicine.

Curth’s book is a helpful and engaging overview of early modern English equine care for specialists and non-specialists alike, and provides an important framework and foundation for further research.